Homepage > Creators and their passion

What does a day in the life of a young ballet dancer look like? Stanisław Węgrzyn, a Polish dancer and choreographer working for the Royal Ballet Company in London kindly agreed to be part of our project ‘Rzeczy Piękne’. We’re delighted and excited to meet such a talented and hardworking young man 😊 We will talk […]

Wiola Sowa, one of the most talented Polish directors of animated films, winner of multiple awards in Poland and abroad, accepted the invitation to our project ‘RzeczyPiękne’. Her interests include universal topics that touch on the subject of the condition of human nature, relationships, growing emotions and their influence on our lives. We talk about […]

Images of artistic beauty are also coming from that Beauty, the one that’s above everything else. /St. Augustine/ Robert Rumin is an artist who uses clever mix of traditional and modern themes in his Byzantine icon-inspired paintings. After more than twenty five years of creative work he’s managed to establish his individual language of artistic […]

Anna Kaszuba-Debska is an inherent part of the artistic enviroment of Cracow [pl. Kraków]. She’s a painter, director of animated films, author of art installations, children’s books illustrator and a writer. She is constantly experimenting, initiating new things and coming up with artistic strategies for them. She’s fulfilling herself in various art fields, and yet […]

Magdalena Kasprzak is a historic textile conservator. She claims to be a ‘perfectionist with her head in the clouds’, then she smiles and doesn’t want to talk about herself anymore. She grows orchids in every color and variety possible and climbs mountains during fall with her husband Piotr, who strongly supports her in her passion. […]

The mother of Mr. Kuleczka, dog Pypeć and duck Katastrofa. The sorceress and mistress of painting landscapes with light – that’s how ElżbietaWasiuczyńska, a Cracovian children’s books illustrator, is called by her fans, young or old. Ela spreads positive energy and charms with her sophisticated sense of humor. She has clever and witty conversations with […]

The time is a painter too… – says Bogdan Czesak poetically, a Cracovian art conservator who claims that his job – despite being rather difficult and demanding – gives him a lot of joy. Currently, Bogdan and his team are starting to work on renovating the main altar in the St. George parish church in […] 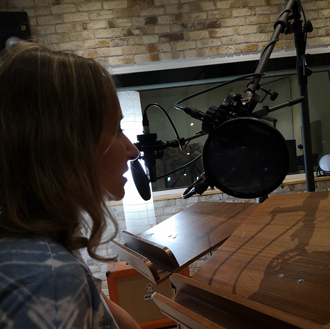